HI! I'm super excited. Know why? Because of Monsters University. Yes, I know it came out a few weeks ago. That's okay, because I never showed you what I painted on my nails. So let's just pretend it's the night before the movie comes out, and we're getting our nails all ready for the movie premier... 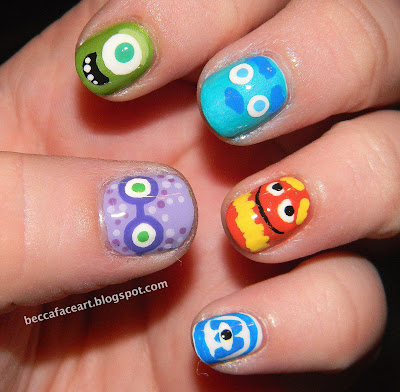 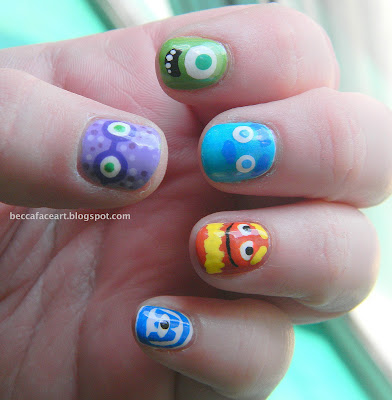 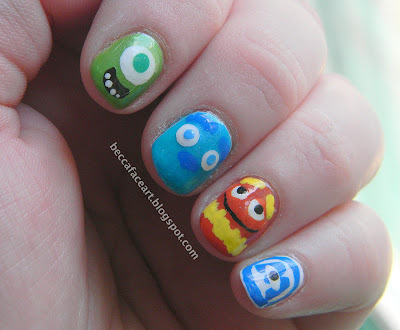 Look at those cuties! For the record, Monsters Inc. is my favorite Pixar movie. And I really was beyond excited for Monsters University, which was fantastic!! And you know me, I love to have an occasion to paint my nails. These got a little flubbed, but that's okay, they were still awesome. On my thumb, I painted Randall Boggs (he's the dorkiest villain ever) using China Glaze Tart-y for the Party as my base color and mixing it with white for the lighter dots and using China Glaze Spontaneous for the darker dots. His eyes and glasses (which he wears in Monsters University) with acrylic paint. On my index, I painted Mike Wazowski using China Glaze Tree Hugger as the base color, and the rest was done with acrylic paints. I know he looks weird, but I wanted to paint young Mike from MU. On my middle finger, I painted James P. Sullivan (pffft, Sully) with a base coat of Sally Hansen XTreme Wear White On and then two coats of China Glaze Towel Boy Toy (his face, of course, was painted with acrylic paints).

Now here's where it gets weird. I painted these before the movie came out, so I wasn't really sure what to expect. And I was also painting these at like 4 in the morning, so I got a little lazy. My favorite character in Monsters, Inc. is George Sanderson, and most of you probably don't know who that is. He's the monster who always managed to have the sock on him and the CDA (Child Detection Agency) guys had to shave him a lot. (23-19, 23-19!!) And I saw a picture that showed he was in Monsters University as well. Had I known that he didn't even have a speaking part, I probably would have painted someone else. But nevertheless, on my ring finger is George Sanderson. I used China Glaze Life Preserver as my base color, and his face and stripes were done with acrylic paints. And finally, on my pinky, is the Monsters, Inc. logo, which honestly has almost nothing to do with Monsters University. But it was 4 in the morning and I was lazy, so that's what happened. A better person would put the MU logo on there, or maybe one of the Greek Life symbols (like Oozma Kappa!) (A better person would also probably be asleep at 4 in the morning instead of rushing Monsters University nails).  But that's it, that's all it takes! Super easy. I did most of mine with a dotter tool. So let me know if you try it out, or if you like it!

Thanks for reading, have a good day, and happy painting! :)